Some researchers have suggested that both girls are, in reality, the same only person, who lived in the same place, but whose history was narrated by several authors and maybe misrepresented or represented with irony and, in this way, straied away from this sacred place.

The beautiful Black Lady of the Lake of Fontega who, unlike the latter (Rosenfranz's version ), mysteriously disappears from the place, in the darkness, between the waves and the mists of a dark night or moved away from his house (the Temple). 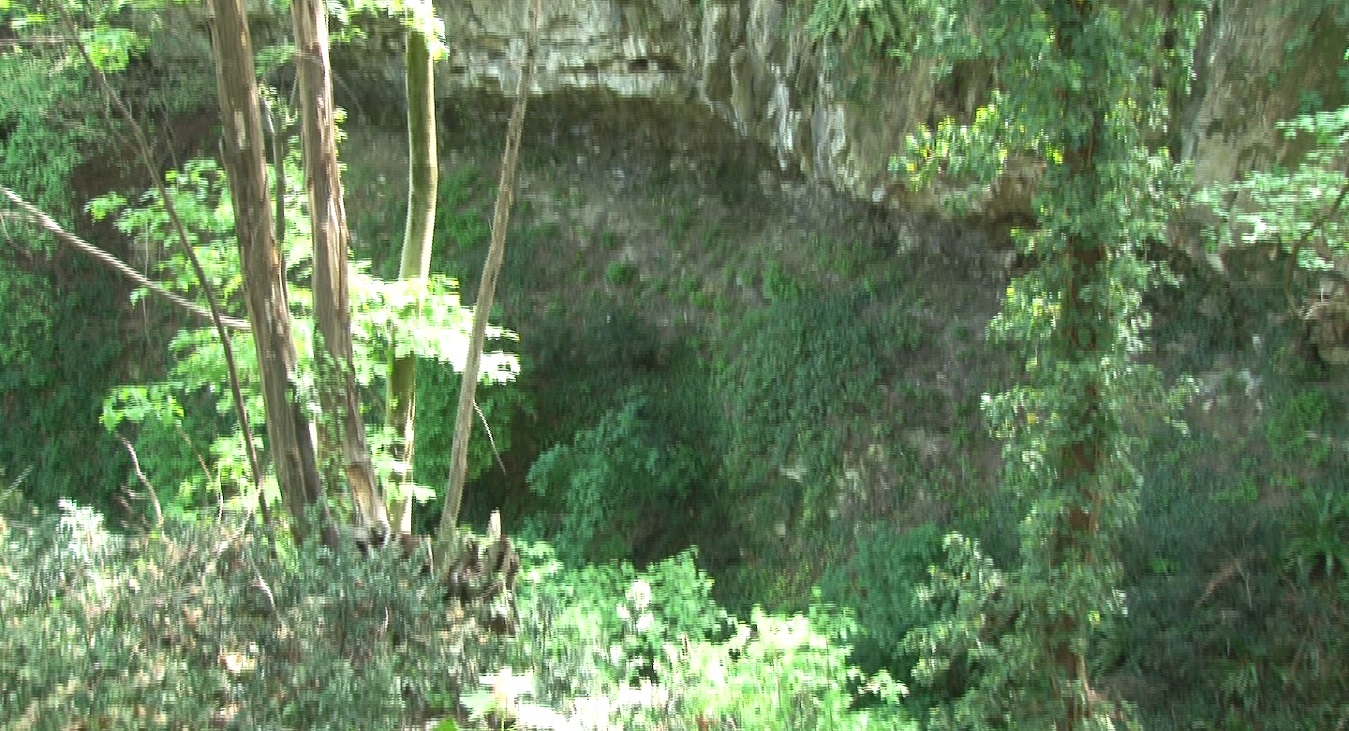 The figure, which probably was nothing more than the remains of the poor girl fallen down, emerged over the remains of a small boat, deviating from the Path of Purification of the Soul (which conduces to the Amphitheatre of the Port of the Angels) to the path of the jump in the crevasse of Scaranto Alto. The site at the Sacred forest, where human remains and belongings of what could have been the Knight Templar were found buried inside a inaccessible cave, suspended in empty space). From that moment, the assumptions about the tragic death and the disappearance of the girl were different. Rebelled in a kidnapping attempt, according to the interpretation of Giovanni Bellini's painting. (see detail picture of the painting magnified). However, try to consider the abduction. The rape of the girls by the Barbary pirate ships was a frequent occurrence (never completely defeated not even today, despite NATO continuously inspects the Mediterranean).
Fernand Braudel, in his book about the Mediterranean at the time of Philip II, called it the oldest industry of the Mediterranean.(inserire immagine del quadro col il ratto delle vergine ). However, a Barbaresc commission of a kidnapping entailed a long and difficult travel between sea, canals and lake. In addition to this, pass until the Port of Albettone, involved so much risks, so much distance and many places guarded by Pallatieri. All these risks had to be faced only for kidnapping one beautiful girl: this was a bit abnormal fact. In additon, the kidnapping usually ended with the payment of a ransom. Was she rich? Why was accepted to navigate until Lake of Fontego Veneziano for abducting a single girl? The Barbary pirates were usual to board for accurate reports of renegades, ships with many passengers. We truly believe that the disappearance of the girl was due to a kidnapping. Seems clear that the girl, the Teutonic Knight's lover, forced to choose between the fire and escape, and convinced that her lover was dead, has decided to throw herself down the cliff. After that, the tides, crashing into the crevasse, maybe had carried her poor body at the tip of the Black Lady, the deepest place of Lake of Fontega. During a period when the lake was overflow, an expert of scientific criminology tried to simulate the suicide by throwing down a dummy from that point. The dummy, when the water receded, was found exactly in front of the deepest point at the Punta of the Black Lady.
The same point during the draining of that part of the lake, in the peat that had preserved it for many centuries, Garstone Trevisol.

In this context, we would think that Luigi Da Porto, through the name "Juliet", wanted to indicate us the place of residence of the nameless girl (suspected of heresy), the beautiful Tietta. That is, the Venetian garden of Querini.
The name Julia, in Greek, stresses the idea of shaggy and fluffy. However, Marco Polo called Fluffy the flowers that filled the orchard during the period of the Venetian Querini.
In Italian Fluffy = Giulia. The T-Ietta was the diminutive code. In an old German, the substantive Templar, then preceded by abbreviation T) meant empelritters T - Ietta.
Today the Brolo Veneziano, with its beautiful Fluffy, is gone; but it is remembered in the local toponymy with the street which is beside it: Via dei Giardini (The Street of the Gardens) , a branch of Via Sacco, renamed in the last century “Via Fosso” , one time, a torrent from the Monte Kukka (in Celtic), now Monte Cucco (home of the Astronomical Observatory).
Before the era of the two lovers, it was a classic medicinal herb garden of the farmstead, which secrets were guarded by the Druids and the Priests of the Temple. In some ways, the culmination of the Tietta in his tragedy is very similar to the model of Romeo and Juliet which were an ispiration for Luigi Da Porto, John Florio (Shakespeare).
In fact, the Noble Teutonic Knight, probable the secret lover of Juliet (Giul -T-Ietta) will not join the group of Templars, which was escaping from the impending threat of the Papal confiscation. Much of the Garrison sail from the Darsena of the Port of Angels December 20, while he wasn't. In order to return home, he decided to go back to the North riding, and facing enormous risks.
For Luigi Da Porto, as for Ruzzante / Tassoni (see Tassoni-Secchia Rapita) and for Vincenzo Bellini in painting, rebuilding this tragic story of "The Thorn Birds" (Die Dornenvögel, The Thorn Birds) in its frankness and in the place where it was really originated, meant incurring censorship and confiscation.*
As we know today, it is a fact wich is doubly dangerous ,because of two prohibitions:
- First of all, it was forbidden to have sex with a girl to the Knights of the Militia Christi. The Church, at that time, tended to put people under torture, often killing anyone who remember the deeds of the noble generous Knights.
No one, either inside or outside the Order, could no longer speak about the love story lived among the two shores of the lake.
But what happened to Giuli-Tietta and his handsome Templar?
It seems that the body found by Gastone Trevisol in the lake was the one of the Maiden.
Learning that her beloved was wounded swerving to the other lane, the path of the Purification of the Soul, which leads to the "Leap of Black Lady", she decided to throw herself down the crevasse, finding death . Her Knight, returned to look for her, consumed the second tragedy by committing suicide, in that theater which had seen their love grow.
The Lady Black recalls the tragic story of the Miramare Castle of Carlotta with Maximilian of Hapsburg. Learned that her Maximilian had been brutally shot by the Mexican rebels, she wasn't able to committ suicide, but just because she was locked up in the Gartenhouse of the castle. On the contrary, Margherita Maltarello, obsessed by the loss of her love, fell down from the Royal Palace of Savoy.
These are just tragic stories united by an unfortunate destiny which for a fatality, in a place created by God, and because of a troubled era, have not been blessed by fortune.
Stories which you may not believe, not even imagine that are really happened and ended so much sadly.


(* Tietta is a diminutive of "Juliet". These free interpretations regarding Tietta, may be part of an assumption emerged from the folk tradition - handed down and accumulated over time - , which does not consider the differences between two historic dates which, obviously, differ only for the name, that combines and unites them toghether.
It is assumed that even Tassoni / Ruzzante, speaking in mid-1500 about Menon, who was the lover of a churchman, could have used the name of a descendant, who could have been called with the name "Tietta" as a term of endearment used by the family, in honor of a famous ancestor, that is the Juliet of 1300. In this case, however, Tassoni refers with irony to a story between the characters - really happened in 1550- , which preceded the tragedy of the two lovers, which does not have a tragic outcome and which has a reference with Menon, the lover of the churchman. We can also assume that, as a descendant or relative, she was a beautiful woman, because her beauty was enhanced up to go downhill towards the area of Montecchio).